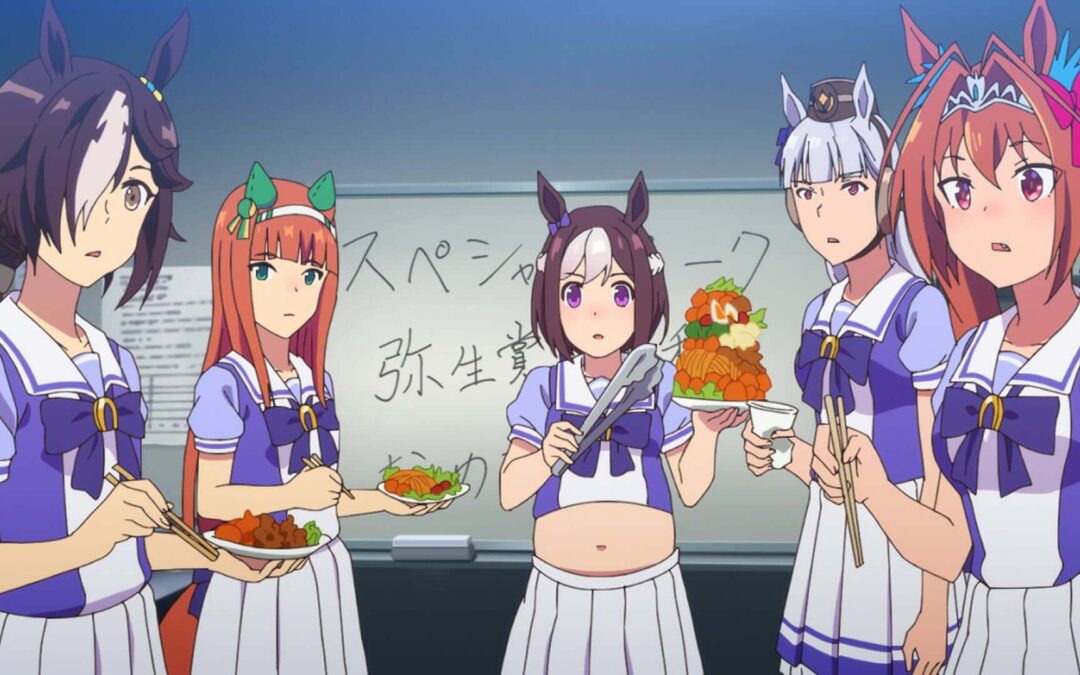 The full name of Uma Musume is Uma Musume Pretty Derby. It is a Japanese multimedia franchise from Cygames. It came in 2016 with the announcement of a mobile game for iOS and Android. They use a trick before releasing the game. They were delaying the release of it So the anime adaptations from studio Kai and P.A.Works want to introduce it to its fans that a series is coming.

The main star of the game is the ‘horse girls’ who are in the real world alongside humans. She gets training in the race to become number one. In the Pretty Derby game, there is a connection with the real world. Because the horse girls were originally the souls of famous racehorses from our world. The first season was about the horse girl which became one of the major special weeks of all time. As she transfers to Tokyo’s elite Tracen Academy from the countryside to win the Twinkle Series race. In her second season, after many struggles and many sports injuries that followed, Tokai Teio. This series is full of strong writing, voice acting, and great characters.

The translation of the game name is “Horse Girl Pretty Derby,”. It is a racing game that is made by getting inspiration from real-life racehorses. These are personified by anime-style girls. Sure, the concept might be different and can raise a few eyebrows. But when we see its red-hot popularity this game is nothing to make fun of.

Uma Musume Pretty Derby game was released on February 24, 2021. The game has promptly gained steam. On July 20, it surpassed 9 million downloads. The game celebrated its 6th month anniversary last month. Since it became a hot and most favourite topic for people. There were particularly surprise gifts for its users, like jewels and bonuses of login for their special character Silence Suzuka.

In Japan, associated key phrases from any new information instantly become trending topics on Twitter. The soundtrack of this game also gets released on TikTok. Even if you are not a player of this game or if you have never played this game. There are probably many chances or many people who have seen the trend on social media sites. In this article, we will discuss the secret to its success.

To win the race you need a training game. You work with your horse girl to win it. In the training simulation game, you work as a trainer with your “horse girl” to win races. Uma is your standard free-to-play mobile app at first glance. But in fact, this game is a mixed-media entity that has been developed through anime, manga, and other media. The purpose of using these other mediums was to bring the focus back to the game app, which monetizes gameplay through gashes. The storylines are different, but the universe is the same in manga and anime. This allows the game fandom to access different facets of the universe.

Reasons Behind the Game Popularity

Following are some reasons for the popularity of this amazing game.

In the series, the horse girls are meant to revive the souls of famous real-life racehorses of the past and present. And, then transport to another dimension. When you win the real-life chance to sing and perform on stage like other real-life Japanese idols. These scenes are for the real enjoyment of fans. As you know that there are a lot of twists which makes it even more exciting. You can even be just a fan and check out the racing without investing anything.

The Gamer Becomes a Trainer

In the game, if a player wants to beat the competition and wants to build up strength. He or she can do it from the recent release of it by training their different horse girls. And over time they can eventually reach the highest rank. You will feel a closer relationship with your horse girl partner when you get into the role of trainer.

The game founders have done endorsements from top celebrities from Japan. They advertise Uma Musume: Pretty Derby with popular Japanese personalities like famous baseball players known as Masao Tanaka. As you know, they are active on social media. And loves to talk with his fans. It was not a surprise that this thing became the greatest hit in Japan. When the fans are so crazy, it is obvious to see such results.

From here you will find a basic introduction to a selection of Pretty Derby characters with their names:

Rice shower is Known as the ‘Record-Breaking Black Assassin’. And he has a reputation that is at odds with her actual caring personality. The real Rice Shower racehorse also managed to win a lot of different top races before the end of his career. The top races are Kikuka Sho, Tenno Sho and Nikkei Sho.

The special week is the main protagonist of the series. She is the main and first character that you will see in it in promotional stuff. In northern Japan, a special week is a caring and cheerful horse girl from Hokkaido. At the end of the anime’s 1st season, she won the Japan Cup.

Tokai Teio is one of the major characters of the second anime season. Tokai Teio has a great amount of pride and also has a strong competitive drive. In life, she has won the counterpart in the year of 1993, the Japan Cup and 1993 Arima Kinen Grand Prix races, among all others.

Daiwa Scarlet is one of the popular horse girl idols who ambitiously aims to be number one in every race. In real Daiwa, Scarlet was also a successful racehorse from Hokkaido who won many competitions such as the 2007 Queen Elizabeth II Commemorative Cup and the 2007 Oka Sho race also.

Mejiro McQueen is a major character in the story of the 2nd season. Mejiro McQueen comes from a prestigious horse girl line. That’s why she carries great pride, but still, she is a hardworking horse girl who works hard to support her friends. In life, Mejiro McQueen was a stallion (male horse) who started his career later in life, winning prestigious races such as the prestigious Tenno Sho and Kikuka Sho races.

Gold Ship is the longest-serving member of the Team Spica racing team at Tracen Academy. Gold Ship has a free and easy life, but sometimes she has an unpredictable personality that contrasts with the amount of time she has been on the team. This is clear inspiration from the real-life Gold Ship racehorse, who’s equally unpredictable personality. They always made a great effort to win and surprise us.

Silence Suzuka is the second leading character of the 1st season of the anime series. Silence Suzuka is a silent, beautiful horse girl who always surprises the crowd by rushing to the front with superb speed. She is also known as the silent queen of horse girls. The horse that she is representing is famous for having won the 1998 Takarazuka Kinen race before an injury. She had an injury in the same year, unfortunately, that cut his career short.

Oguri Cap is a horse girl who has a cool personality and a big appetite. She is a food lover. She is seen in the series with a fully equal dedication to both racing and eating. The real-life Oguri Cap has made a stunning record of 13 wins, including four Grade I races. It will be from his transfer to new management at the end of his career in the year 1988.

In the series, there are full, flashy, and stylish uniforms worn by all the horse girls. This cause naturally attracts a lot of fans in the Japanese cosplay world. There are a lot of people who want to try them out for themselves.

The Structure That Keeps Players Coming Back

It has a unique and complex game structure for a training simulation game. This game is not like other games. As mentioned before, it is not a straightforward game. All you need to do is be able to develop an understanding of each of your characters based on their individuality and characteristics.

Moreover, there’s a famous trait called “Inheritance” which allows you to pass on the abilities of it. It can be anyone who has been inducted into the Hall of Fame. Or whose training has been completed, to another character you will be training in the future. This is a very much attractive feature that empowers the users to continue training and raising different “horse girls,” to combine them for even more advanced capabilities.

They delayed the release of it for three years to improve the quality of gameplay and its graphics. This game has shown everybody the best graphics ever. Everyone was surprised to see how good the graphics are available now for a mobile game. They also have a unique feature in the game. Their users and players can rotate the angle of a camera according to their wish during the racing and also in live performances to see different views of their likings.

Keeping in view popular manga and anime trends in Japan, Uma Musume Pretty Derby game uses the formula of turning animals into adorable characters. And a story loaded with energetic and compassionate moments. The anime is an adaptation of a popular mobile game, developed by well-known Cygames and this is one of the most downloaded games in Japan.

The premise puts the idea of the player in the head of a team made up of horse-girls, who have different and unique abilities to run and compete in races. They play the same way as in the real world. The makers of the Uma Musume Pretty Derby game will have a brilliant mind. Because he puts all things and abilities in Pretty Derby Characters according to the real world. Besides, all characters are based on famous racehorses.

It is according to their statuses as well as whether they have any similarity in their life. Everything seems to be going very well throughout.

When Uma Musume got so much popularity, some people criticised it. There were many negative comments raised on social media. There is an all women community to criticise it because they were displeased with the main concept of this game. Their point was that they are showing mistreatment of women, and a lack of respect. Even though they call it “disgusting”. And also said “a literal mockery of women”.

According to their point of view, the game and anime have a general feeling of criticism that creates insensitivity and machismo. It represents a concept in which a man owns a group of women that are using the benefits in horse racing of horse.

The Defenders of the franchise stressed that critics of the game do not know it in depth. Other than this, different titles which are similar to the themes are also offered in the market. But there are also good-looking men in front of a woman who is the protagonist in the series with a woman as the protagonist. The controversy over Uma Musume fueled the already known bonfire around franchises of this type. It has not reached a major audience compared to other games and anime.